Having to choose an electoral system, it is important to choose one that is easy to use, easy to understand and that elects a representative candidate for the community. In doing this there are various tensions to resolve. One of these is between electing the person preferred by most voters and electing the person most appreciated. The two things are not the same.

The Majority Judgment system, defined by MIT press as “a new theory and a new method of voting, judgment and classification, which has proven to be superior to all other known methods” is at the same time easy to use, easy to understand, and has a number of very interesting properties that put it in a category of its own.

The operation is as follows: once the candidates are decided, each candidate is judged by the voters by assigning them a possible judgment. The judgments are adjectives in strictly monotonic order as appreciation. Example: insufficient, passable, discreet, good, excellent. To which is added the judgment “refusal”.   Then each voter must judge each candidate. 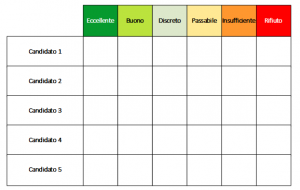 Obviously the vote is secret, also because it can be offensive in a small community to hear the opinions that some people have of others. 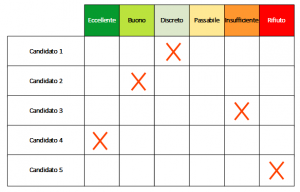 When it’s time to decide the winner, all the votes of all the voters are evaluated for each candidate and the median is drawn among the votes. 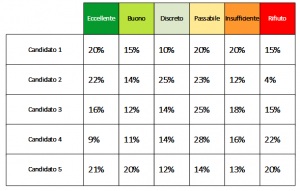 Note that since these are judgements put into words you cannot extract the average; there are many other reasons why it is not appropriate to use the average but the median.

The most likely thing, however, is that two or more candidates have the same median. It is therefore necessary to make a play-off between these two candidates. This is done in the following way:

Suppose there are two candidates Andrea and Barbara who both received the Good judgment as median. To resolve between these two candidates as a first step we exclude all the other candidates who were found to have a lower median. Then the votes in which people voted Good for Barbara and Antonio are taken away, one after the other, two by two. This makes the medians unstable. Until one of the two as a result of the instability moves up (so it wins) or down (so it loses) 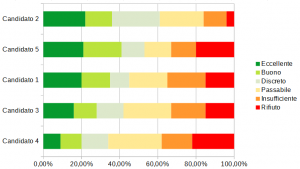 It should be noted that the number of judgments can change. You can in fact experiment with 5, 6, 7 different judgments. The important thing is that they are all expressed in words, that they have a clear meaning and that people in the community understand the meaning of the word and the order between words. In the example we avoid the word “distinct” because some people attribute the result “distinct” above “excellent” and others below.

The Majority Judgment system is not subject to Arrow’s Theorem. Arrow’s Theorem states that it is not possible to have a voting system that enjoys the following properties at the same time:

The Majority Judgement system satisfies all these characteristics. This should be impossible according to Arrow’s theorem, but it is only impossible if one considers forms of voting in which candidates are ordered and no judgments are attributed to candidates.

Our Open Source implementation of the Majority Judgment can be found on our github account.